8 through 10 weeks post surgical repair. I started this blog to detail my journey from average couch potato to T1 diabetic to oldest Olympic bronze medal winner. I did not choose gold. I am humble and not deluded, a realist and I think you should be honest with yourself. The gold would come with too much press and I value a little privacy. And silver just does't compliment my complexion well. Bronze really highlights my sun spots and the gentle lines at the corner of my eyes. I was also motivated to prove that any hardship can be powered through with brute determination and an iron will. I was very surprised that this was not an original idea. More than 80% of runners use running to deal with some sort of hardship. (I just made that number up and there is very little my old school newspaper editor can do about it.) And they all focus their determination into moving on, through, or over their personal obstacles. I have run with bypass patients, ex-heart attacks, cancer survivors, griever's of lost loved ones, partial amputees, formerly overweight, presently overweight, recently divorced, fighting addictions, and many other general casualties of life. Everyone is dealing with something and most of its major. Instead of inspiring the unfortunates with my limitless pluckiness, I found that I had joined a mobile support group. I have been inspired by some really special people over my 3 year distance career.

The last month of recovery has been very hard on me. My genes are good friends with low grade depression and my chromosomes only encourage the bastards. One month after starting this blog, I was recounting more physiology than race reviews. I really miss the interaction with the 7 or 8 running clubs, groups, and loosely confederated crazies I was drafting off of on the roads and trails. I have substituted other exercises and stayed in pretty good shape. My upper body has benefited from some attention and my running crafted bulimic nervosa, heroin junkie on a fast body build has morphed into a bulkier well balanced golfer type physique. I am no longer able to get into the movies on a child's ticket. But nothing replaces the joy an hour's worth of Umstead's Company Mill trail provided or the camaraderie of an insanely early Saturday morning jaunt with the Galloways. But at 10 weeks out now and although my reserves have been drained, I hope I am well past the half way point toward my first post op run. I am casting off my funk and focusing on the near future. I wanted to be honest about this recovery as I linked to the Runner's World forum on peroneal repair and tens of people maybe following. I found a lot of information on people getting ready for surgery and some on people fully recovered 18 months later, but very little on the middle. I have found this part to be the most challenging. I have a scarlet letter number (a 26.2) tattooed onto a sad little calf. That irony describes this time perfectly. 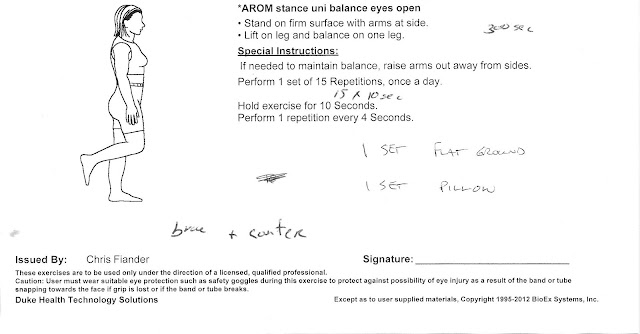 If my recovery was portrayed cinematically, (and full disclosure, I am in late stage negotiations with the home shopping network for my own reality series) these weeks would be blurred together with a Kanye West's  Stronger or maybe Corey Hart's Sunglasses at Night montage as I drank eggs, ran up escalators, and waxed on and off Mr. Miaggi's old jalopys. We really should develop better recovery technology. I have been closely monitoring TV, but have yet found a pill that will make your ankle solid for more than 4 hours. In reality, my day to day progress could be measured with a caliper. Even though, I am very far ahead of the typical post surgery timeline, I keep comparing my status with last year's abilities. At this juncture I am walking barefoot (thickening up the skin) up to 2.5 miles every 2 to 3 days and cross training with weights and the elliptical. The ankle swelling is pretty severe after the walk or just standing for 8-10 hours, but recedes within 48 hours. Strangely, the limited weight bearing of the elliptical has a positive effect on ankle bloat. I have been able to peak my heart rate at 90% of max.

I have my next Orthopedic meeting in 5 days. I would love to get the green light for a run/walk program. I am signed up for the Spinx 1/2 October 27. I would love to do the 10 miler at Medoc two weeks before the 1/2. Its hard for me to fathom completing those distances when walking a 5k results in a major cankle. For now, I am evaluating pillow balancing on 1 leg against stretchy band wrestling as my final Olympic discipline.